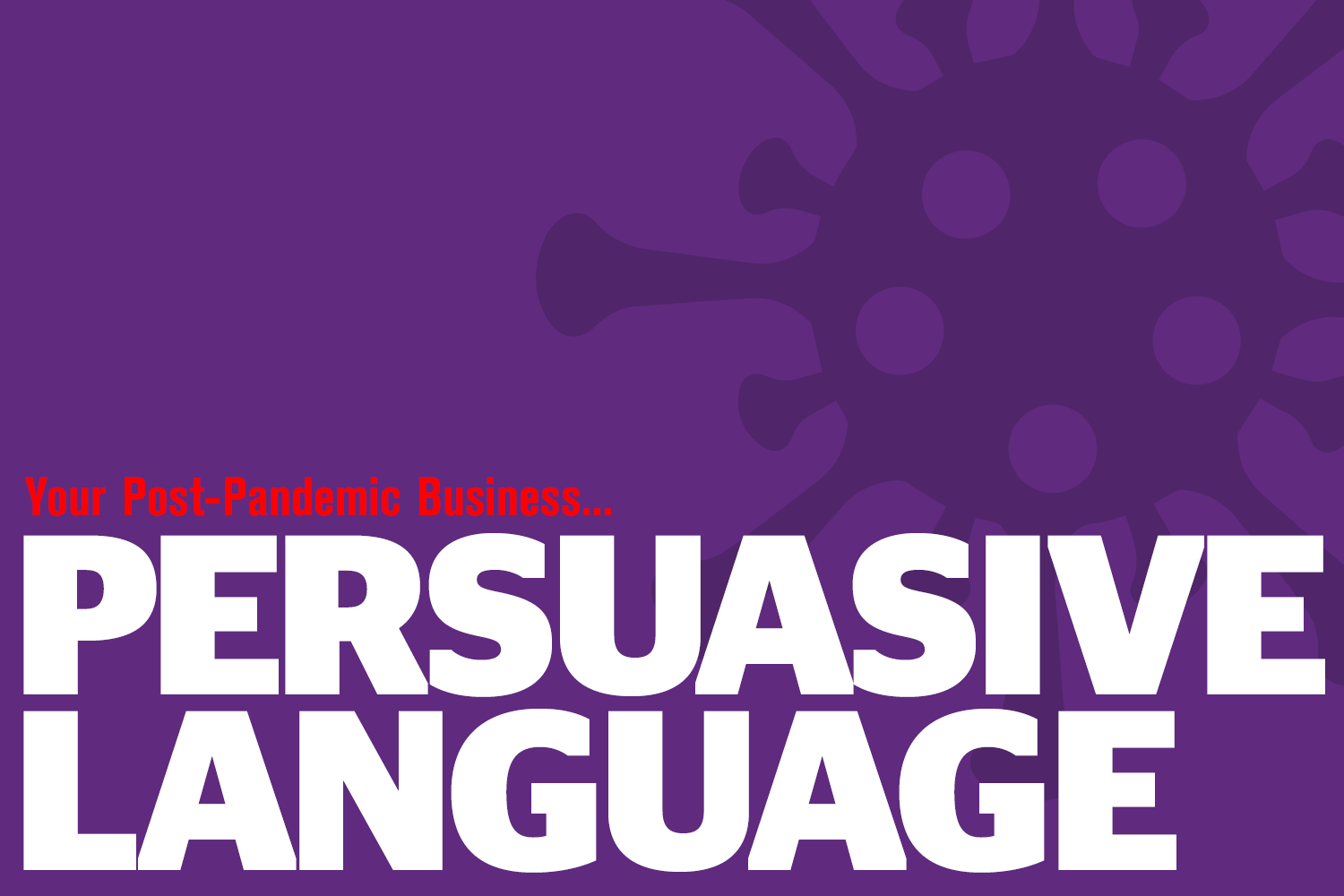 Why does choosing persuasive language to get others to do something, think a certain way or believe in a business vision or mission matter to post-pandemic recovery?

Having the right things to say and saying those things in the right way will be more valuable than ever in the new normal because:

The art of rhetoric – or using language to argue and persuade – goes back to the ancient Greeks; in fact, to philosopher and polymath, Aristotle, no less.

This is about developing the skills to convince a collection of people to support an idea. If you’re in business, that concept might sound familiar to you; indeed, using carefully chosen and persuasive language is not just for ancient Greeks or today’s politicians.

Thanks to a useful piece of lockdown learning – the HarvardX course in Rhetoric: the art of persuasive writing and public speaking – I was introduced to a simple framework for thinking about what you write and what you say, with persuasion in mind:

Having a brief and clear statement of your main idea or argument.

The logical reasoning you use to support your argument, complete with evidence.

Establishing your credibility as the person writing or speaking.

Appealing to the emotions of the audience.

In addition to that, there are stylistic techniques that make the language you use more impactful.

For example, your diction – in effect, the specific choice of words and how they sound – makes a difference; using varied sentence structure and length creates different effects and emphasis. Similes (“you’re as strong as an ox”) and metaphors (“you are the sunshine of my life”) can add vivid colour and imagery which help your audience to imagine your idea as well as understand it intellectually.

The HarvardX course examines how using rhetorical techniques have made famous speeches effective, persuasive, memorable and catalysts for change. The speeches in question were made by historically significant Americans such as Martin Luther King, President John F Kennedy and Charlton Heston.

However, using rhetoric is not just for those at the vanguard of social or political change; it’s for you and me, both in our daily personal and business lives. That said, it’s worth looking at how a modern leader, Jacinda Ardern – the New Zealand Prime Minister much respected for her leadership and her communications ability – uses rhetoric.

Talking about racism, Ardern has said:

“Even the ugliest of viruses can exist in places they are not welcome. Racism exists, but it is not welcome here. Because we are not immune to the viruses of hate, of fear, of other. We have never been. But we can be the nations that discovers the cure.”

In her words, she compares racism to a virus (an image that needs no embellishment in today’s Coronavirus context) and continues the metaphor into the idea of immunity (or lack of it) to hate, etc, and onto the concept of a “cure”. Framing racism like a health crisis that needs a solution makes it all the more human and something that everyone can relate to. She could have said “racism is evil and we need to get rid of it”, but which is the more memorable?

In the wake of the Christchurch terror attack, she told the New Zealand Parliament: “Speak the names of those who were lost rather than the man who took them. He may seek notoriety, but we will give him nothing, not even his name.”

Notice how, rather than saying “Let’s speak…”, starting with the word “speak” gives extra power to her instruction and puts the victims of the attack front and centre, while the perpetrator’s importance is relegated (where no extremist wants to be). And she emphasises that in her next sentence: though he wants “notoriety”, what he’ll actually get – and her language stresses this – is “nothing”. Repeating the letter “n” in that sentence builds Ardern’s sense of righteous anger.

There are many more examples from Ardern that demonstrate how the power of language – and particularly the skills of rhetoric – are more than just an academic exercise or verbal gymnastics. This is language that touches hearts and minds.

May you never have to make such a speech to your employees, customers, investors, shareholders or the media as Ardern did to the New Zealand Parliament after the terror attack.

However, whenever you need to engage, to interest, to challenge or to inspire with either the written or spoken word, treat your language with the same care as you would a crystal glass. Handled carelessly, the results could be permanently damaging.