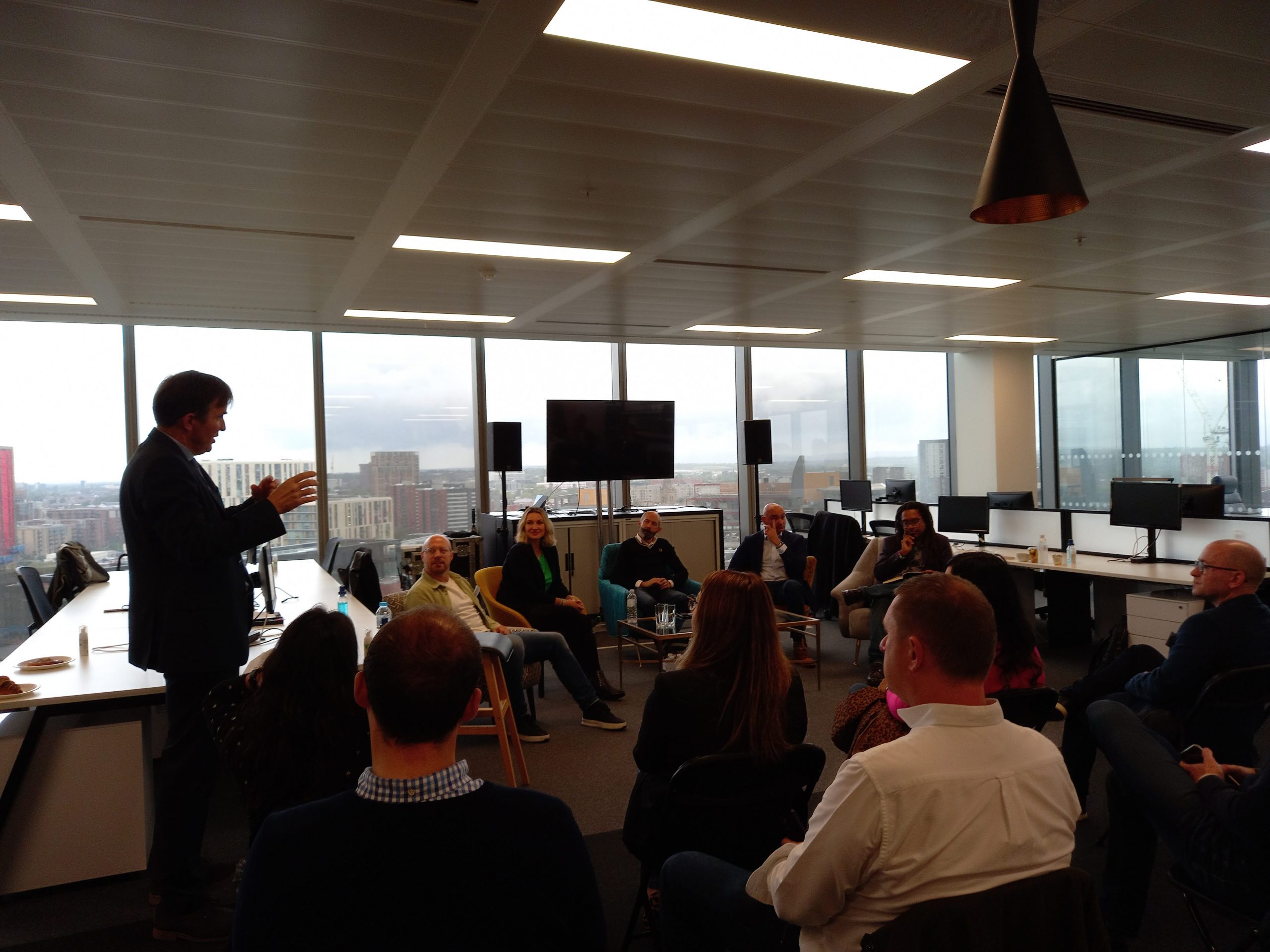 In the heady days of the late 1990s’ “Madchester” music scene, a pseudo-biblical phrase resonated: “…and on the sixth day, God created MANchester.”

Today, it feels right to borrow the theme for the Manchester tech business scene and proclaim: “In the beginning was the word…and the word was…purpose.”

At least that’s what came across, loud and clear, from tech businesses at the recent Robert Walters’ business growth forum event in Manchester’s Spinningfields.

But who, in business, genuinely gives a Happy Mondays about purpose?

As recently as February this year, a visiting professor at the City Business School, Stefan Stern, penned in the FT a hugely non-committal article about the value of purpose, quoting from another business academic that “when purpose and shareholder value get into a boxing ring, I will bet on shareholder value every time”.

Months later – in the same publication – columnist, Helen Thomas, talks about purpose in terms of the zeitgeist and that “the government and society is increasingly asking all companies to subscribe to a more purposeful way of doing business. The law must match that ambition.”

So, FT, what’s it going to be? If one of the premier business publications can’t make its mind up, who can?

Well, it seemed the Manchester tech business panel at the Robert Walters event certainly could.

What’s the point of purpose in tech businesses?

When I raised the point about purpose previously getting a “kicking” in the FT, the idea was refuted: Mark Hartley, founder and CEO of BankiFi, noted that – for tech people – it’s less about the money and more about solving a problem.

James Wilkinson, CEO at Zuto, said it made him “physically sick” when company shareholders took the rewards and didn’t recognise the teams who delivered the results. Dan Sodergren, CIO at YourFlock (who also suggested I stop reading the FT) summed up purpose today as “not a nice to have” but “mission critical”.

But, behind the strong convictions, what in practical terms are Manchester tech businesses doing about purpose and what could others learn?

Zuto’s mission is to transform the way people buy cars and “repair the lack of transparency” in the motor business; being a “force for good, to change the industry for good”.

For financial technology business, BankiFi, its sense of purpose is driven by the problem faced by sole traders of collecting payment from customers. Late payments average, according to Hartley, 71 days in the UK, though the problem is international.

With investment from building society Nationwide and having the Co-op as a customer, BankiFi is building its ethical position and wants to scale up to ensure banks provide better services to their customers.

YourFlock’s Sodergren wants nothing less than to change the future of work: helping companies to keep their staff engaged, productive and respectful of employees’ values.

Damian Hanson, director and co-founder at Mission Labs, summing up what drives him is “not pots of money” but the “ability to have a blank piece of paper and conceive an idea that employees, customers investors believe in – it’s unbelievably rewarding”.

Zuto’s Wilkinson cited certain principles that underpin the way the company does business and treats its people: looking after the financial and mental well-being of their “Zutonites”, using the Covid-19 furlough scheme sparingly and not losing a growth mindset.

This also involved listening to staff about how they felt working from home (not great for everyone), bringing them back to the office with protective workplace measures and, ultimately, encouraging people to work wherever they want to.

And the result? Business Cloud executive editor, Chris Maguire, spoke of seeing a “real buzz about the place” when visiting Zuto’s offices and Wilkinson described the business “growing quicker than ever”.

Over at BankiFi, Mark Hartley said: “If you look after your customers and employers, the shareholder value thing looks after itself.” Which is the reason he decries the push for tech businesses to become Unicorns or, in his words, “I hate the Unicorn thing”.

It should be the “journey that gets you out of bed in the morning”, says Hanson, who added that you’ve got to be “passionate about the business”’ and “excited about what you’re doing to be successful on the start-up journey”.

At Zuto, Wilkinson spoke of not taking the biggest valuation when introducing private equity into the business, but rather going with investors that “felt most human and most like us”.

And while Zuto’s culture has morphed into something more high growth and with a greater intensity, it has maintained its sense of “togetherness and purpose”. Having a bigger purpose, Wilkinson said, is “really important and fosters a culture – making a difference is the most important thing”.

Wilkinson’s son, Jimmy, who has the condition Prader-Willi Syndrome, is another factor in his outlook: “It made me think more about inclusion and how to be better; it softened me.”

A hard nose, as well as purpose

Alongside the clearly purposeful stories coming from the tech business panel was a hard- nosed sense of what it takes to create (and sell) a tech business.

Hanson of Mission Labs, currently on an earn-out after selling the business to Gamma Communications, said: “My advice to someone setting up a tech business? You’re going to have to work harder than you ever dreamed possible for years.

“Most of the time it’s not pleasant – it’s not for the faint hearted to be a start-up founder. It’s seen as a glamorous way to go but it’s very hard and fundamentally not cool at times.”

Back to purpose: what did each of the tech business panel want to see from tech businesses in the coming period?

Damian Hanson: “Be present with people – a definite mindset change.”

Mark Hartley: “You have an extended family when you start a business – that’s a really good thing to keep hold of.”